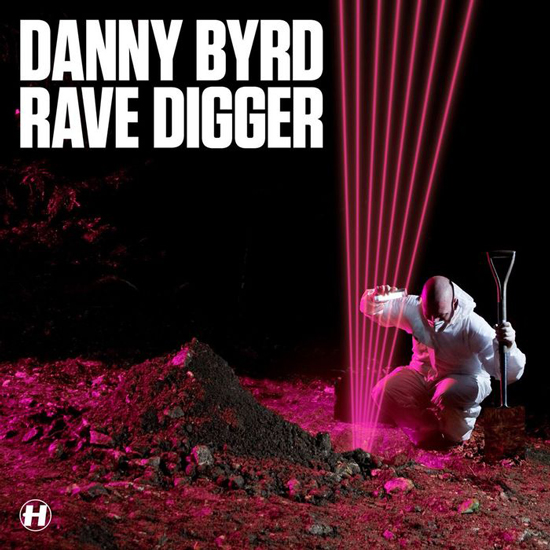 I remember rave the first time round. I was 10 years old when I was hearing tales of acid house parties on the news and seeing people with smiley face badges. It was around this time I got my first “Ghetto Blaster”. Fate played a hand in what happened next. The radio was tuned to a local pirate station playing acid house music. I was hooked. Every night I would scour the dial for pirate stations playing acid. Over the years acid became rave, rave spawned hardcore, jungle, D&B and the rest, as they say, is history.

Now some 20 years of listening to pirate radio, Dreamscapes, World Dance’s, clubs, pubs and my own forays in to the world of DJing I’ve just downloaded Danny Byrd’s latest album “Rave Digger”, and for the record its awesome!

Danny has managed a rare thing. He’s taken a form of music some 22 years old and injected a new energy into it whilst keeping it true to the style it represents. The production is flawless whilst maintaining the chaotic anything goes combination that made rave music so exciting to listen to. Samples overlaying samples, vocals, piano, raster chants, screams, squeaks and bangs, it’s all here in spades. (Spades – Rave Digger – get it?)

The album is a mixture of the D&B styling we have come to expect from Danny with tracks so rave fueled they wouldn’t sound out of place on an old Prodigy album!

Stand out songs on the album for me are “Hot Fuzz (Featuring Tomahawk)” and “Planet Earth”, both of which are so rooted in the 90’s you can’t help but want to reach for the lasers! If you’ve listened to the Prodigy’s Warriors Dance or Take Me to the Hospital you already know the score.

The only disappointing track on the album is Danny’s version of “Sweet Harmony”. Don’t get me wrong it’s not a bad track. The classic piano rift and vocal sampled from Liquids original track still makes the hair on the back of my neck stand up. However unlike “Ill Behaviour” which takes influences from “Wildchilds Renegade Master” and twist them into something new, Sweet Harmony leaves you feeling like you’ve heard it all before. It’s not a bad version just a missed opportunity but one that shows respect for not messing with a classic!

There are two skits intercut into the album which offer a both interesting insight and amusing take on the whole clamp down on illegal parties.

This album is a must for any D&B head, hardcore or old skool raver. The best £5.99 you’ll ever spend on iTunes. So dust off your whistles, break out the white gloves, decorators masks, boiler suits, get your hands in the air, give someone a love and stay sorted – Safe a f*ck! ☺

« Previous Story - My experience of the iPhone 4 “Death Grip”

Just wanted to weigh in on this. There are lots of posts about the “grip of death” however in my […]

One year with the Apple iPad - Next Story »