One year with the Apple iPad 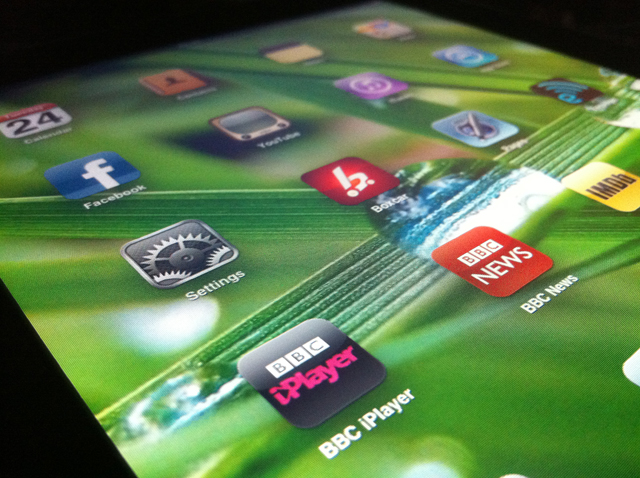 On the eve of the UK launch of iPad 2 I find myself thinking about the year I have just spent with the first generation. What a ride it was!

If you take a quick look back at the news archive you will find an excited post from me about how I had received the iPad the night before the official launch day. It’s fair to say I was more than a little smug about it [Understatement of the year].

So after a year of using the device what do I think? How has it fitted into my home and work life? The answer is quite well – but not without some adaption. Let me explain. I am a long term Mac user and as such I am never far away from my beloved MacBook Pro. I am also an avid iPhone user and here in lies the problem.

I have long got used to only breaking out the MacBook Pro for heavy lifting tasks or to Sync my iPhone (and various iPods). For most of my casual browsing, music, films and gaming I use the iPhone. The convenience of the iPhone makes it my go to gadget and 9 times out of 10 it is always in my pocket or in easy reach. Generally I have to make a special trip to retrieve my iPad from the where it’s stored. It’s not that I am lazy but there is nothing I can do with iPad that I can not do with my iPhone! The iPhone 4 is also substantially faster! I also have the wifi only iPad which limits it’s use on the move – an issue not faced by my iPhone!

I’m painting a bad picture here but that’s not what I want this post to be about. After I got over the initial excitement of iPad ownership I noticed a definite drop in its usage. But the iPad benefited from one of the oldest things in the universe…
…Time.

Time has been great for the iPad. Over the last year my iPad usage has increased greatly. Here’s why.

When first released there were a number of iPad apps but nothing like the number of apps there were for the iPhone. Over the year the number of really useful apps have appeared for the iPad. I bought Pages at launch and have used that extensively for taking notes or writing copy. Gusto means I make simple code based changes to the websites I design and administrate. Twitterific (in my opinion) is the best Twitter client available and I prefer it to the official Twitter app. Also nods to Flipboard, Friendly and Garage Band.

With the launch of iOS4.2 the iPad really came into it’s own and 4.3 was the icing on the cake. Being able to stream to the Apple TV or from other iOS devices was a revelation. Multi-tasking made switching apps a joy (especially as I was rocking a dev account with those now widely publicised additional gestures). I could print from it (thanks to the AirPrint Hack for my MacBook Pro). These two software upgrades made the iPad more work friendly and a hell of lot more practical for me.

Work and “the cloud”

My office finally granted me access to the wifi network and now I run the design team job tracking system from the iPad. I can search for information during meetings. I configured my calendars using Google Calendars so my many Macs, my iPhone and iPad calendars are always in sync without physically having to plug in the device. At work my iPad is now my go to device (even more than my iPhone!)

I had no illusions when I first purchased the iPad that, for me, it was a luxury device. At the time I didn’t need it – I just wanted it. However over the last year I have to come rely on my iPad, especially at work where I don’t know how I would cope in meetings without it (and not just to sneakily check the geek sheets for the latest news when the meetings are dull!)

The iPad is a joy to use. I still think if you have an iPhone and a laptop then an iPad may be overkill. However the always on convenience and screen size means (if I can be bothered to get up and get it) I will now always favour the iPad over the MacBook Pro and my iPhone for emails, casual tasks and light lifting.

So what about iPad2? Well although my heart says “gimme gimme gimme”, I’m letting my head (and wallet) rule this decision – it’s not for me. The design (although similar) is not as cool as the original. Although slower than my iPhone I really don’t need the extra speed. Cameras should have been included in the first version – but there inclusion in the latest version doesn’t make me want to switch up. Good work Jonny but I’m waiting to see what you do with iPad3. My game plan of buying one, skipping one (as I did with the 3G to 3GS change) has worked out pretty well for me. I would have been gutted if I was tied into a two year contract on the 3GS having seen the iPhone 4!

So as I slip from the position of “early adopter cool” into the “rocking last years model” category, I do so with joy not regret. The iPad2 will be a huge success and definitely outsell the original – but I know I was part of the “first act”. I know that I experienced the joy of first opening that box on a wholly new device, pressing the home button and being blow away by the sheer scale, brightness and beauty of the big black slab screen. I wont make the mistake I did with the first iPhone and sell it buy the next – a decision I still regret now! I wont be making the same mistake with the first gen iPad.

The original iPad is a work of art and for that reason I’m respecting a classic and skipping the new kid on the block… well, for now any way.

Posted from my (Original) iPad

I remember rave the first time round. I was 10 years old when I was hearing tales of acid house […]

Well that was long overdue! - Next Story »

You’ve only got to look at a mechanics car to know how busy they are. If they are driving around […]